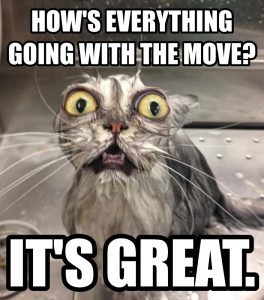 Boston, we are in you.

We’ve been pretty quiet for a few months because moving is hard, friends. It takes a lot of planning, organizing, PAPERWORK, and is exhausting in almost every way (physically, emotionally, and mentally). We said goodbye to many friends and colleagues in Cleveland, and shed a few tears.  Moving a lab, grants, a house, and a family (including two confused cats, and an excited preschooler) is a special kind of challenge.

But, we have survived. And, we are very excited to finally be here.

At this point, I should be writing a list of tips for moving a lab. At least things I’ve learned, but I will reflect on that a bit more in the coming weeks, and get back to you. In this post, I want to share my thoughts about uprooting lives, making big changes, and the emotional burden of those decisions.

Moving a lab is a BIG deal. It is a decision that no PI takes lightly. Besides the effect it will have on your staff and trainees (loss of employment if they can’t move, uprooting their lives if they do), it grinds your science to a halt for months. We started winding down in the fall – changing focus from starting new projects/generating new ideas, to completing experiments and manuscripts.  I’ve been told by senior colleagues who have moved their labs multiple (!) times, that it will be a year until your lab is back to full throttle again. If you’re organized. If you’re lucky. 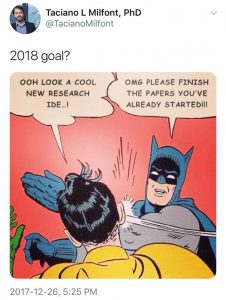 Here’s the good news: those projects we were finishing up?? That’s important work. Those were things that needed to be wrapped up and put out there. THAT is our job. Scientific findings are nothing if no one knows about them. Being forced to complete a chapter of a story is valuable, and will make 2018/19 good publication years for Placenta Science. 🙂 #GETYOURMANUSCRIPTOUT

One of the biggest reasons I decided to relocate the lab to Boston is because of the academic environment. I knew our program needed an influx of new ideas, and that I would grow as a scientist in a research institute with several other investigators working in complementary areas of maternal-fetal health.  The Mother Infant Research Institute is the perfect home for Placenta Science and we are excited to be a part of it.

I needed to keep reminding myself of these things as I churned through the grind of moving. New environments come with new colleagues, potential collaborators, resources, and new IDEAS. The emails I received from my future colleagues kept me going as I was knee deep in red tape.

Moving involves many emotional ups and downs, both personally, and professionally. I didn’t expect all of my 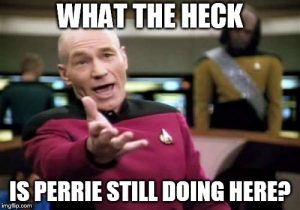 colleagues, staff, and trainees to be thrilled about my decision. And though the majority of them were understanding, even supportive, many were disappointed. As a PI, my job is to keep the science moving forward, and that can mean making tough calls. Knowing that I was disappointing people, letting some down, was a heavy emotional burden.

The lab moved 5 months after announcing the decision to relocate. I wanted lab staff that weren’t moving with me to have time to find new positions, and for trainees to complete projects. It also took time to arrange for the move, and to shut down the lab. But, 5 months is a long time to stay after telling people you are leaving. You are in a weird position of one foot in, one foot out. After a while, everyone wants to/needs to move on.

The hardest part of the move for me, was saying goodbye. Goodbye to colleagues-turned-friends who were so supportive these past few months, goodbye to my first lab with it’s drippy taps, goodbye to a city I adore, goodbye to a reasonable commute and living expenses. Goodbye Cleveland.

This site uses Akismet to reduce spam. Learn how your comment data is processed.